Cryptocurrency and cryptoassets aren’t a surprise for anyone anymore. In fact, as of today, the global market capitalization value for cryptocurrency stands at $998 billion.

Cryptoassets can be defined as privately held digital assets based on cryptography, distributed ledger frameworks, or any other technology on similar lines.

The numbers speak volumes about the future of crypto. The Basel Committee report by Renzo Corrias talks in detail about the exposure of banking institutions worldwide in the niche of cryptoassets specifically.

What is the Basel Committee?

The Basel Committee for Banking Supervision (BCBS) is an organization that provides a forum for the world’s banking and financial institutions. Through this report, it aimed to understand banks’ stance on crypto engagement.

The BCBS report itself is a novel perspective on understanding banks’ exposure to and dealings in cryptoassets based on a specialized data collection template designed specifically for this purpose.

These results in the report support the Consultative Document by BCBS in understanding the treatment of cryptoasset exposures of banks – a study conducted earlier in June this year.

The findings of the latest Basel Committee report reveal extremely interesting insights. Summarizing them in a nutshell, the report speaks of: The BCBS report pegs the overall cryptoasset exposure submitted by participating banks at €9.4 billion. Let’s get down to a detailed breakup.

The sample size of the survey involved 19 banks that participated in the cryptoasset exposure study. These banks furnished their crypto activity based on the template provided to them.

Of the banks that submitted cryptoasset data, all but three were Group 1, the latter being Group 2.

What are Group 1 and Group 2 banks?

The 19 participant banks that reported their cryptoasset activity form a relatively smaller portion of the larger Basel III Monitoring performed on 182 banks. This exercise focused majorly on the risk exposure of these banks – since cryptoassets come with their own set of risks.

The Basel Committee report on cryptoassets does prescribe some level of caution and discretion while studying the results. Given that the crypto ecosystem is still in its fairly nascent stages, an over- or under-reporting of crypto activity by banks (to a slight extent) should be expected.

The diagrams below represent the big picture of participant banks in the cryptoasset exposure study. 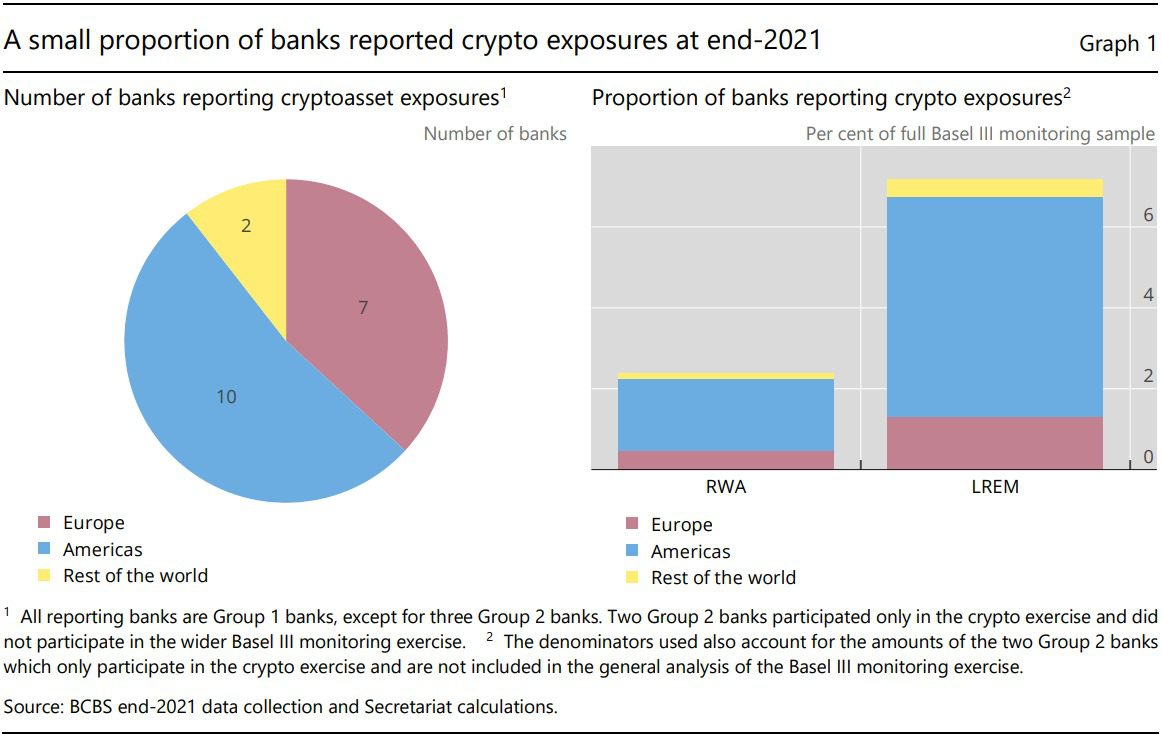 The Basel Committee report studies the spread and extent of cryptoasset exposure amongst the banks of the world in three broad categories:

Each category highlighted intriguing facts about the entire cryptoasset ecosystem in banking.

Noting the distinct nature of two exercises – the Basel III Monitoring and the Basel Committee Report on Cryptoasset Exposure – the participant banks have been assessed on a weighted-average basis across the sample spectrum of those that reported their cryptoasset exposures.

The numbers reveal that the figure of €9.4 billion in cryptoasset exposure forms only about 0.14% of the totals thus calculated. Pitched against the figures revealed through the Basel III Monitoring, the numbers shrink relatively to 0.01% of the total exposures.

Furthermore, there is unevenness observed in the quantum of the exposure contribution of each bank to the total figures.

Two banks take up more than half of the cryptoasset exposure in the totals. Of the remaining quantum, 40% is contributed by four more banks, leaving the rest for the remaining survey participants.

The report highlights the following cryptoasset exposure patterns displayed by participant banks from across the world in a pictographic way: 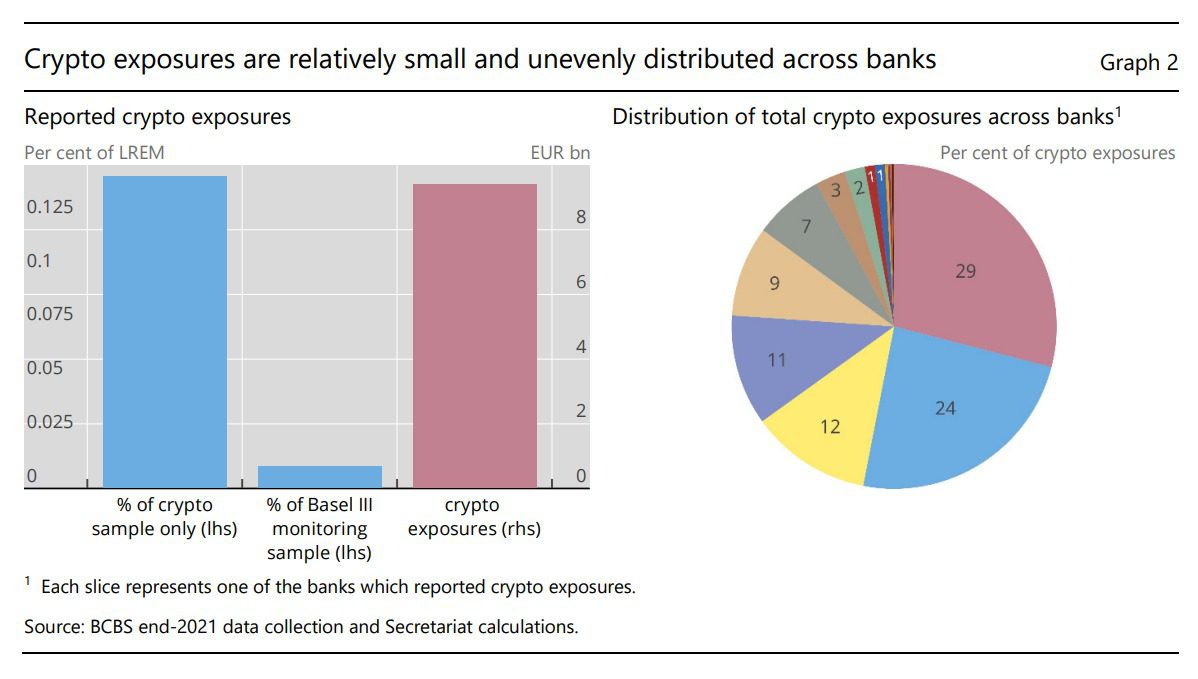 The diagram clearly represents a total of 53% of cryptographic exposure as coming from two banks. Of the remaining contributions, four banks share the majority.

Since cryptocurrency and assets are still in their fledgling stages, the attempts at understanding true exposure are riddled with caveats and assumptions.

Exposure Based on Cryptocurrency Type

Statistics peg Bitcoin as the second most traded cryptocurrency in the world as of September 2022. The trading volume for Bitcoin surged to $38.45 billion, with Ethereum following close behind at $18.37 billion.

The same trend seems to have seeped into the participating banks’ preference for cryptoassets and currencies.

While Bitcoin and Ether individually find favor for cryptoasset exposure as their own entities, banks also reported exposure through other instruments with these two coins as the underlying asset.

Together, Bitcoin and Ether-based crypto exposure instruments make up more than 90% of the total.

The table below shows the top ten cryptoasset exposures with underlying cryptocurrencies in percentage that lead the bandwagon in banking: 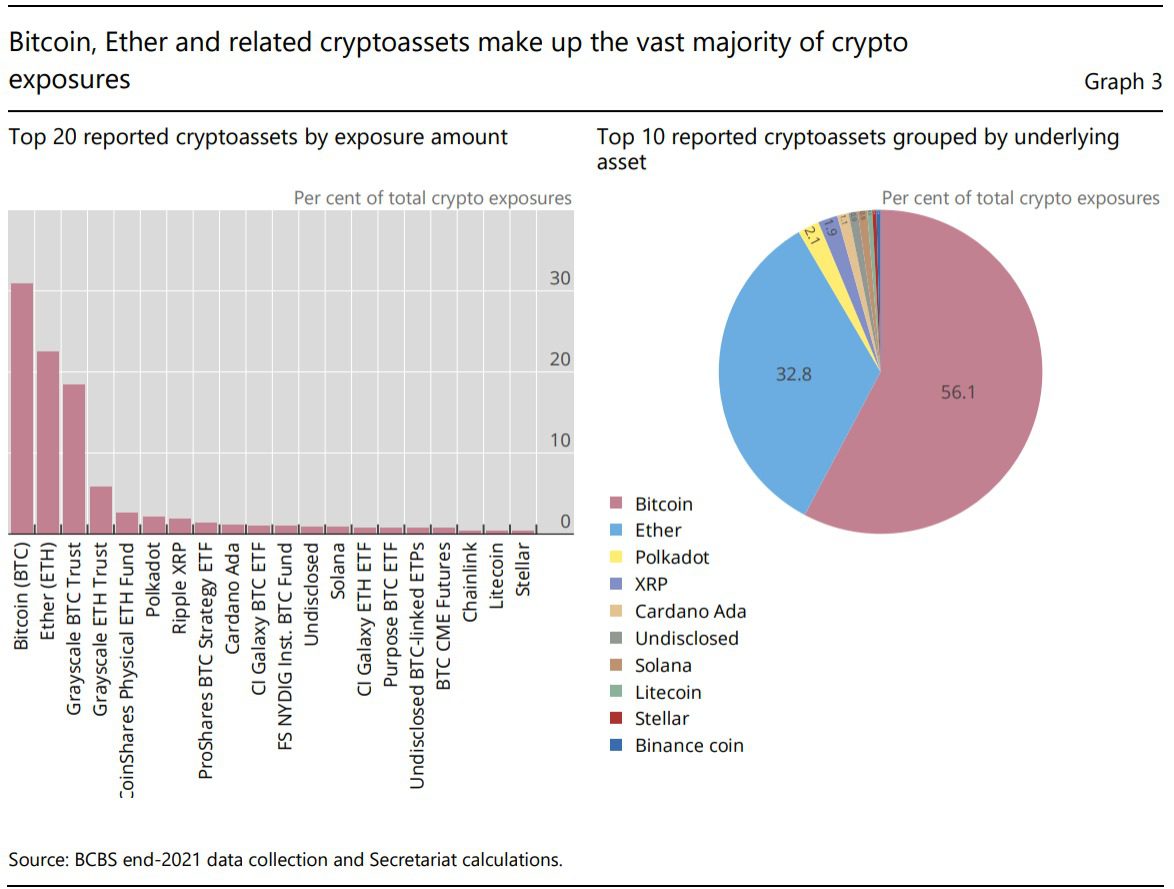 Cryptoasset Distribution Based on Activity

The Basel Committee report highlights that the cryptoasset exposures reported by banks are spread across a multitude of activities. For better understanding, the report segregated and clubbed these activities under three broad but distinct heads:

Holdings and Lending in Cryptoassets

Cryptoasset exposure that directly exposed banks to cryptocurrency through holdings and/or investment in cryptoassets was classified under this head. It also included holdings and investments in products that have an underlying cryptoasset.

Activities of lending to entities (households, financial institutions, and corporates) that already have some exposure to cryptoassets were also counted under this category. Besides that, activities that issued cryptoassets off their balance sheets were also included.

This head covered the following activities:

The activities that involved providing wallets or similar services for cryptoassets are classified under this head.

It also counts the facilitation of client activity in products that have underlying cryptoassets, which includes trading cryptoassets or crypto-related securities by self or through a manager.

The Basel Committee report showcases the division of cryptoasset exposure across the three categories defined above in percentage.

Surprisingly enough, the highest percentage of cryptoasset exposure reported by banks happens to be in the third category – the wallet/insurance/custody activity niche, with a share of just over half the pie.

Ranking second in cryptoasset activity share for exposure are the clearing and market-making services, with a pie share of 45.7%.

The table below highlights a further subdivision of the top activities and their share in cryptoasset exposures as reported by the participating banks:

Reportedly, wallet and similar services trump the ranks with the highest share. The Basel Committee report makes an excellent attempt at understanding the cryptoasset ecosystem across banks around the world. However, the participant banks majorly hail from the Americas and Europe, limiting the global insight to the two larger, first-world regions.

Bitcoin finds itself bolstered in its position yet again through the findings of this report, placing it as the number one preference for banks in the crypto ecosystem.

It does, however, indicate the cryptoasset exposure confidence through the activities from which this exposure is gained.

What do you think about this report?

Stay up to date with Crypto via CleverRobot

Welcome to CleverRobot. A forward-thinking investment product, pension, and property finder. I also educate on all things crypto and digital assets.

Not for Hong Kong residents